It's Encanto's diversity for me...

...Beyond (not) talking about Bruno!

I finally saw Encanto, woo hoo!
Lots of talk about Luisa, and rightly so but there's more - there's...
(in alphabetical order, no favouritism here!) 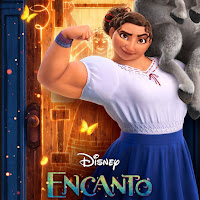 Luisa is the - some-might-say - surprising star of the film for her strength and size, combined with her expressions of vulnerability. She is not your typical Disney female, and yet it is her (less available) merchandise that is apparently sought after.
I am so here for it!And I have another reason for loving it - my brand journey started with my own Mirabelle (spelt differently) who, like me, has the butterfly as a symbol. However, I can't talk about Disney movies without at least a mention of the issues surrounding them, such as the battle there was for the Luisa we have, stereotypical princesses and 'he'roes, why the name Bruno?* (unless just for the song!) and the latest controversy being the Snow White remake."Why does it matter?" you might ask, well... because stereotypes are limiting, the slim/pretty = healthy/good narrative is subtly divisive and damaging, and frankly representation matters. (Next up I look forward to black characters who remain human for a whole Disney movie, but I'll accept their progress and hang on to Wakanda!)
There's lots more on this through Body Happy Kids, who I deliver training with, by the way - but, for now lets just go with the positive shift our love of Luisa brings.And before I go here's a few other kids shows/films I think deserve a shout-out (though they're not without some challenges also)- Brave: Merida the character was described as a 'tomboy' and proposed changes to her in merchandising, such as shrinking her waist size, sparked debate and were knocked back.
- Sing: showing talent comes in all shapes and sizes. (I need to see Sing2 soon)- Trollhunters: Jim Lake isn't the school star but turns hero and another show hero Toby, and his Grandma, are in higher weight bodies and love interests.
Wreck It Ralf: for it's anti-Princess and the big guy himself
- Zootropolis: breaks stereotype about what a petite person (character) can do and who the baddie can be.

What kid films would you shout out for body positive messages (where the baddie is fat and/scarred and the star isn't a stereotype of attractive for example)?
If you haven't seen Encanto or any of the above movies yet but now intend to, enjoy!
Denise x
*feel free to ask me more!